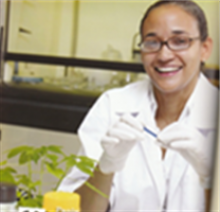 Professor Paula Tennant is a Research Plant Pathologist working with virus diseases of fruit crops at the University of the West Indies, Mona, Jamaica. Her work involves the identification of viruses of vegetables and fruit crops with an emphasis toward developing management strategies using Biotechnology as well as natural sources of tolerance or resistance from diverse gemplasm, including domestic and wild species.  Close collaboration with Cornell University (New York, USA), The Biotechnology Centre, University of the West Indies, and the Jamaica Agricultural Development Foundation (JADF) has led to the establishment of the approrpiate regulatory structures to oversee the use and importation of agricultural biotechnology products in Jamaica and the development of virus resistant transgenic papaya.

Paula Tennant graduated from the University of the West Indies, Mona in 1990 with a B.Sc. in Botany.  In 1996, she received a Ph.D. degree in Molecular Plant Pathology from Cornell University.  Thereafter, she held post-doctoral positions at Cornell University (1996-1997) and the Biotechnology Centre, University of the West Indies, Mona (1997-2000). In 2000, she joined the faculty in the Department of Life Sciences as a lecturer and was promoted to Senior lecturer in 2008 and Professor in 2012.  Maintaining ties with the Biotechnology Centre, she has written over one hundred publications on virus diseases of fruit and vegetable crops.  Dr. Tennant co-teaches undergraduate courses in Molecular Biology, Virology and Plant Biotechnology.