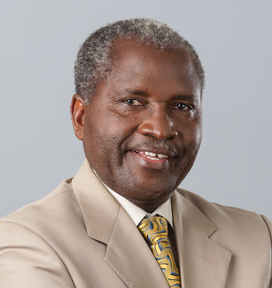 Professor Ishenkumba Kahwa joined the Department of Chemistry, University of the West Indies, Mona in 1987. Among his many achievements, he collaborated with his PhD and MPhil students to prepare and determine the precise identities of a series of new molecules using laser beams, and they discovered and published the first such molecule in 1989. Professor Kahwa established a laser laboratory at UWI Mona, which at present includes powerful lasers, super-cold facilities and associated electronic and computational instruments. Over 60 refereed publications have resulted from the work of Professor Kahwa and his team.

He served as Professor of Supramolecular Chemistry since 2000, Head of the Department of Chemistry (2002-2008), and Dean of the Faculty of Science and Technology (formerly Faculty of Pure and Applied Sciences) for the period 2008-2013. As Dean, he initiated curriculum reform and modernization efforts and led initial efforts to establish Engineering programmes at Mona.

As Deputy Principal at the Mona Campus (2013-2018), Professor Kahwa led the development and establishment of a new suite of B.Sc, M.Sc, M.Phil and Ph.D. programmes in Occupational and Environmental Safety and Health (OESH). The programmes, hosted by the Department of Chemistry in the Faculty of Science and Technology, began in September 2006 under his leadership and were introduced at the UWI St Augustine Campus in 2009.

Professor Kahwa served the University for 31 years and following his retirement in 2018 the title of "Professor Emeritus" was conferred upon him for the significant contributions he made to the development of the Chemistry Department and The UWI as a whole.

Professor Kahwa has received several awards for his work and remains active. He has been Board Chairman, The Hazardous Substances Regulatory Authority since its establishment in 2016 and serves on several boards including The National Commission for Science and Technology (2014 to date), Jamaica National Accreditation Council (2012 to date), International Centre for Environmental & Nuclear Sciences (1999 to date), Environmental Health Foundation (EHF) and EHF Resources (2015 to date), and Technology Solutions (since 2019).  He is also Honorary Consul for Tanzania in Jamaica.