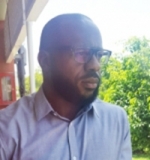 Glenville McLeod is an assistant lecturer in the Department of Government, UWI Mona Campus. He was born in Port Antonio, Portland but he later moved to St. Mary in the late 1990s. He attended the St Mary High School and entered the University of the West Indies in 2008. He graduated in 2011 with a BSc(Hons) in International Relations with a minor in Public Sector Management.

After finishing his first degree he immediately went on to pursue his Masters in Government with a specialization in International Relations which he completed in 2013. His MSc research paper focused on ‘Jamaica’s adaptability to a Green Economy’ where he highlighted land conservation, electrical consumption and reduction in pollution as possible areas in which a transition to a Green Economy should begin in Jamaica. For his work in the aforementioned area, he received the departmental award for best research of 2013.

While undertaking his Masters he was a graduate assistant in the department of government. This further facilitated his growth in academia and led to the attainment of his current position in the department.

His love and enthusiasm for research in the areas of climate change, sustainable development and the Green Economy sees him currently enrolled in the Masters of Philosophy programme in the Department of Government. Outside of his research focus, his other areas of academic interests include the global political economy and International Law.  Somewhat distant of academia, Glenville enjoys travelling, photography, music production, volunteering, and sports.

Towards a Green Economy: Exploring the feasibility of the Green as the catalyst for Sustainable Development in Jamaica’s tourism sector.

Jamaica, like many other Caribbean countries is susceptible to the effects of climate change. This susceptibility has increased over the years, evident in disastrous hurricanes and changes in rainfall patterns. Much of this is due to the fact that during the last two decades much capital was poured into property, fossil fuels and structured financial assets. However, in comparison relatively little was invested in renewable energy, energy efficiency, sustainable agriculture and ecosystem and biodiversity protection. The faults with such thinking were highlighted in 2008 with the global economic recession, importantly though, it provided an avenue for us to see the way forward. As a response to the multiple global crises the green economy is deemed as the change to combat the aforementioned problems, but it also represents an approach to development that would reduce Jamaica’s vulnerabilities. As such, this research explores the feasibility of the green economy to not only reduce Jamaica’s vulnerabilities but to enhance the transition towards sustainable development within the tourism sector.