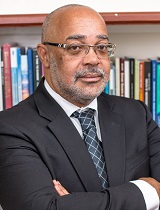 Director General of The OECS

Dr. Jules had had extensive regional and international experience, most of it focused on education, social policy and organizational transformation. He served as Registrar and Chief Executive Officer of the Caribbean Examinations Council (2008-2014) leading a thorough modernization of the Council. He has also served as Vice President Human Resources Cable and Wireless St, Lucia (2005-2008); Permanent Secretary for Education & Human Resource Development St. Lucia (1997-2008) as well as Permanent Secretary for Education and Chief Education Officer in revolutionary Grenada from 1981-1983.

He has authored numerous articles on educational policy, educational reform and adult education in the Caribbean and in small island states as well as other publications on public sector reform, organizational transformation and cultural studies. His work includes chapters in several books published by Routledge (1991, 1994, 2010), SUNY Press (1993), Nova Publications (2006).

His career has been characterized by visionary transformational initiatives aimed at making Caribbean institutions more responsive to the needs of people, more competitive in the global arena and more efficient and sustainable. He is a vocal advocate of educational transformation in small island states.