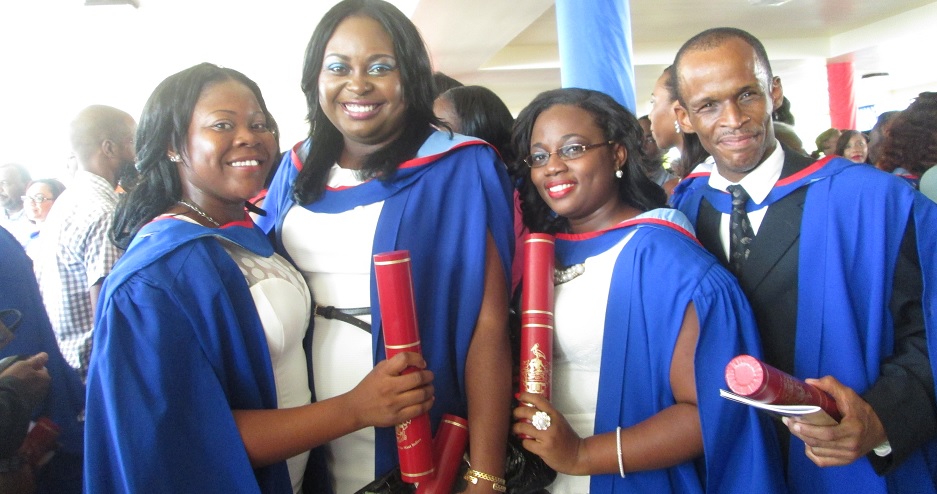 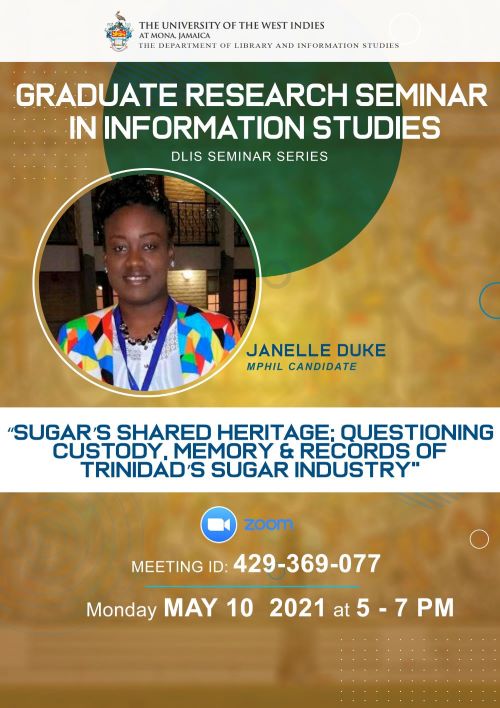 Media and Information Literacy (MIL) emphasizes a critical approach to literacy. MIL recognizes that people are learning in the classroom as well as outside of the classroom through information, media and technological platforms. It enables people to question critically what they have read, heard and learned (Grizzle, 2017, para.1). To this extent, the Department of Library and Information Studies (DLIS), UWI, Mona has been involved in the UNESCO-UNAOC MILID University Network since 2011. The UWI through the Department of Library and Information Studies (DLIS) and the Caribbean Institute of Media and Communication (CARIMAC) participated in UNESCO-supported Student Exchange Programme on Media and Information Literacy and Intercultural Dialogue, in connection with the MILID University Network, February 15-22, 2014 (UNESCO, 2017). The following are partners:

Tribute to Professor Claudette Fay Durrant, delivered by Dr Paulette Stewart, Head of the Department of Library & Information Studies, The University of the West Indies, at the Service Commemorating her life, at the Hope United Church, on Saturday February 6, 2021. 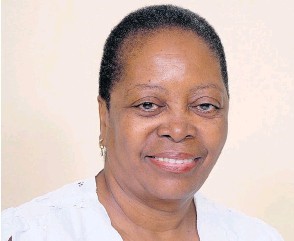 I feel honoured to have been asked to deliver this tribute not only on  behalf of The University of the West Indies and the Department of Library & Information Studies in particular, but on behalf of the library and information community in Jamaica and in the wider Caribbean region. Since her passing, tributes have been flowing in from former colleagues and students all over the region who have warm memories of her.

I wish to begin by conveying deepest condolences to the Durrant family from Professor Dale Webber,  Principal of the Mona Campus, Professor Waibinte Wariboko, Dean of the Faculty of Humanities and Education, other staff in this faculty and other faculties and offices of the university, and her former colleagues  and students in the Department of Library and Information Studies.

May you find the comfort and peace that you seek at this time of bereavement.

We celebrate today the life and service of a dedicated librarian and information specialist who gave over 50 years of sterling service to Jamaica and the region. It was in 1968 that the young Fay Durrant began her career as a librarian, first at Mona from 1968 – 73 and then at Cave Hill from 1973 – 75.  She then went to the CARICOM Secretariat in Guyana as Cataloguer and Indexer, with responsibility for cataloguing and development of indexes to the CARICOM documents.  In 1979 she was appointed Library and Information Training Officer United Nations Economic Commission for Latin America and the Caribbean (ECLAC) based in Trinidad. In this position she was involved conducting training sessions for librarians in the practices and techniques for participation in CARISPLAN, a regional network of 18 countries.

With her appointment in 1989 as Senior Program Specialist for Information Sciences at the International Development Research Centre (IDRC) of Canada, her regional responsibilities widened as she was in charge of providing technical assistance to institutions in Latin America and the Caribbean with emphasis on the development of regional information networks.

As an independent consultant for five years (1984 – 89) she worked under contract mainly with various international bodies, the Commonwealth Secretariat, and the CARICOM Secretariat, to design evaluate and implement national and regional information systems.

After a three year stint as a Director of the Association of Caribbean States with responsibility for  coordinating the work of the Special Committee on Science, Technology, Health, Education and Culture, Fay Durrant returned to her alma mater in 2000. She was appointed Professor of Library and Information Studies and served as HOD until 2005 and from 2008 – 2011 and after her retirement, as a member of the adjunct faculty.

As Head of the Department, Professor Durrant executed her tasks in a very professional manner that made her well-respected by all members of staff. She led the Department as a leader who never shied away from difficult tasks. Under her leadership, she ensured that the staff kept abreast of the trends in information studies by encouraging them to attend conferences and workshops on various topics. She initiated the Annual Summer Institute in Trends and Development in the Caribbean to ensure that faculty as well as practitioners in the information studies environment were provided with professional development on a yearly basis.

During her tenure she published and presented a number of research and professional papers at local, regional and international conferences. Information professionals benefitted from these scholarly publications on various subjects relating to the Caribbean such as telecommunications policies, information systems, knowledge management, e-government and access to government information. At these conference sessions, Prof. Durrant would always ensure that she made new contacts for the Department. As a result of this the Department is presently deeply involved with UNESCO.  In the academic year 2004/2005 she was awarded the Mona Research Fellowship to conduct research on, “Caribbean Libraries and Information Services: An Assessment of Factors which have Contributed to the Current Stage of Development.

In her position as Head of the Department, she ensured that the programmes were on cutting-edge in the information studies environment by developing and introducing new courses to the suite of existing programmes. Her favourite course LIBS3901: Access to Information in the Caribbean was developed and taught by her up to the academic year 2019/2020. Her students were enriched by her teaching and leadership.

When she returned to Jamaica in 2000, Professor Durrant immersed herself into the library and information sector, serving at various times as a member of the Boards of institutions such as the Jamaica Library Service, the National Library of Jamaica, the Information Committee of the Jamaica National Commission for UNESCO and on the Executive Committee of the Library and Information Association of Jamaica (IAJA) culminating in her election as president in 2005

She did not neglect her regional and international responsibilities. She served as a member of the Executive of the Association of Caribbean University, Research and Institutional Libraries (ACURIL) from 2002-2004 and she chaired the Local Organizing Committee of the ACURIL Conference held in Jamaica in 2002.

In 2006 she was elected to serve a two-year term as Vice President of UNESCO’s Intergovernmental Council for UNESCO's Information for All Programme (IFAP) which is responsible for guiding the programme, the objective of which is to narrow the gap between the information rich and poor and to build an information society.

Memories of our days with Prof. Durrant reminds us that she was a gentle soul, an intellectual giant, accessible, and always projecting a calm demeanour, She is an esteemed colleague who had a warm, friendly and pleasant personality that fostered congeniality among faculty, administrative and support staff. The staff will miss her calm demeanour and her former students will no doubt recall the care, patience and understanding she showed towards them, as well as the encouragement she provided when they had challenges. We mourn her loss and will certainly remember the fond memories we had with her

Mr Mark-Jeffery Deans, President of the Library and Information of Jamaica commented that: She was pointed in her directives; yet subtle enough to always welcome another’s ideas and opinions. Professor Durrant’s selfless and dedicated service to the Association and by extension the profession has made an impact on our lives; one that will not soon be forgotten.

Another, I remember her smile, her patience and her calm demeanor. She was a skilful educator who commanded her classroom with gentle, yet effective persuasion

Her gentle coaching and encouragements helped me to appreciate the importance of research in the information field.

Lusiola Castillo the Chief Librarian, Belize National Library Service and Information System said, She was an amazing lecturer and will always be remembered for her friendly and soft spokenness but stern personality

One former student summed it up all very well

Prof, your epitaph is uniquely documented through the lives of the many thousands you touched. Indeed, you did it ALL, your way.

From all of us, we say, may her soul rest in peace.

Tribute to Rosemarie Scott, delivered by Dr Paulette Stewart, Head of the Department of Library & Information Studies, The University of the West Indies, at the Service Commemorating her life, at the First Missionary Church, Kingston, on Saturday January 30, 2021 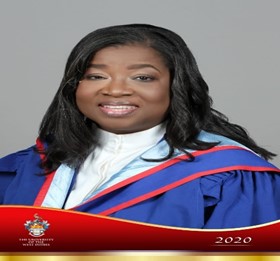 First let me say condolences on behalf of Prof. Dale Webber, Principal of The University of the West Indies, Prof. Waibinte Wariboko, the Dean of the Faculty of Humanities and Education, the entire staff of the Department of Library and Information Studies and the UWI Mona Campus

As lecturers, many times we thought she would quit but as she wrote in one of her request letters that she wanted to complete the degree for job enrichment and personal satisfaction.

When we heard about the death of her husband, we thought that her strong will would have waned and she would now give up, but after another leave of absence to recover from the shock and grief she returned to complete her research paper titled, “ Are You Being Served? Youth Perspective on the Role of the Modern Public Library in Jamaica”.

Dr Heath, her supervisor commented as follows: Rosemarie had a pleasing personality and a warm, humble spirit. Her paradoxical shy, confident smile said a lot about the calm beautiful person she was. Her faith in God gave her the drive to keep going. When I expressed concern for her situation, her reply was- “Dr. Heath, God didn’t bring me this far to leave me.” We take comfort in knowing that at the point of her departure, she was aware of her accomplishment.
No one could tell by looking at Rosemarie, that she had such great will power and an indomitable spirit because she had a quiet demeanour, was soft spoken and gentle. She was a valuable student who cared about the wellbeing of her peers and was always willing to assist whenever she could.

Susan Haye, her closest friend in her cohort, said: “Rosemarie and I shared a sisterly bond since 2004. We were inseparable at one point; travelled together to school and home daily.  Studied and worked on assignments late nights and day on campus. I recalled us talking about anything current daily and she had such a dry sarcastic wit. I would be laughing and in stitches and she would just smile and say, Susan you know it's true.

Rosie's story is one of resilience. I will miss her smile, humility and her wit but our treasured memories will live on forever. I will wrap them in a blanket of love and keep them forever. Farewell my friend.”
We are happy to have known her.  While we grieve her passing, we are reminded that the Lord gives and He takes. Rest in peace Rosemarie, see you in the morning on that great resurrection day. 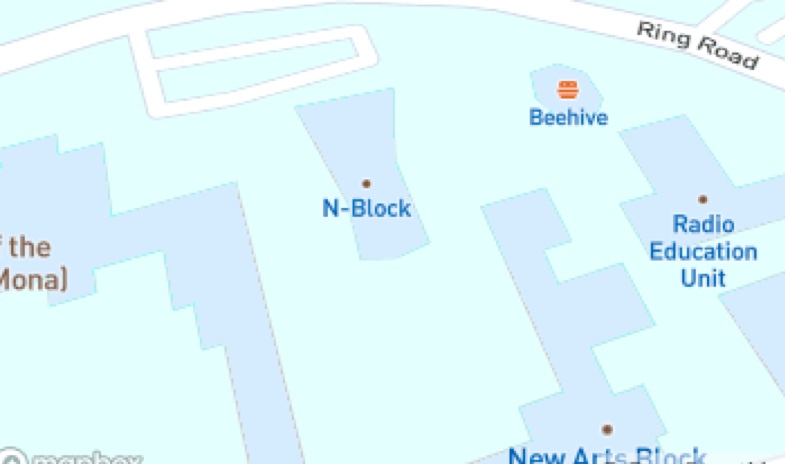 Department of Library and Information Studies