Department of Geography and Geology

Aleem Mahabir and Kristinia Doughorty are the two winners of the 2022 Courtney Russell Award, co-sponsored by American Association of Geographers Caribbean Speciality and GIS Specialty Groups. Aleem's paper focused on psychosocial dispositions & exclusion in the Caribbean island of Trinidad while Kristinia's focused on the resilience of nutmeg agroecosystems in Grenada. Congratulations to both Aleem and Kristinia - Geographers Going Places!
For more information check the following links
https://twitter.com/island_scholar/status/1551941067863474177
https://twitter.com/island_scholar/status/1552274946214268930 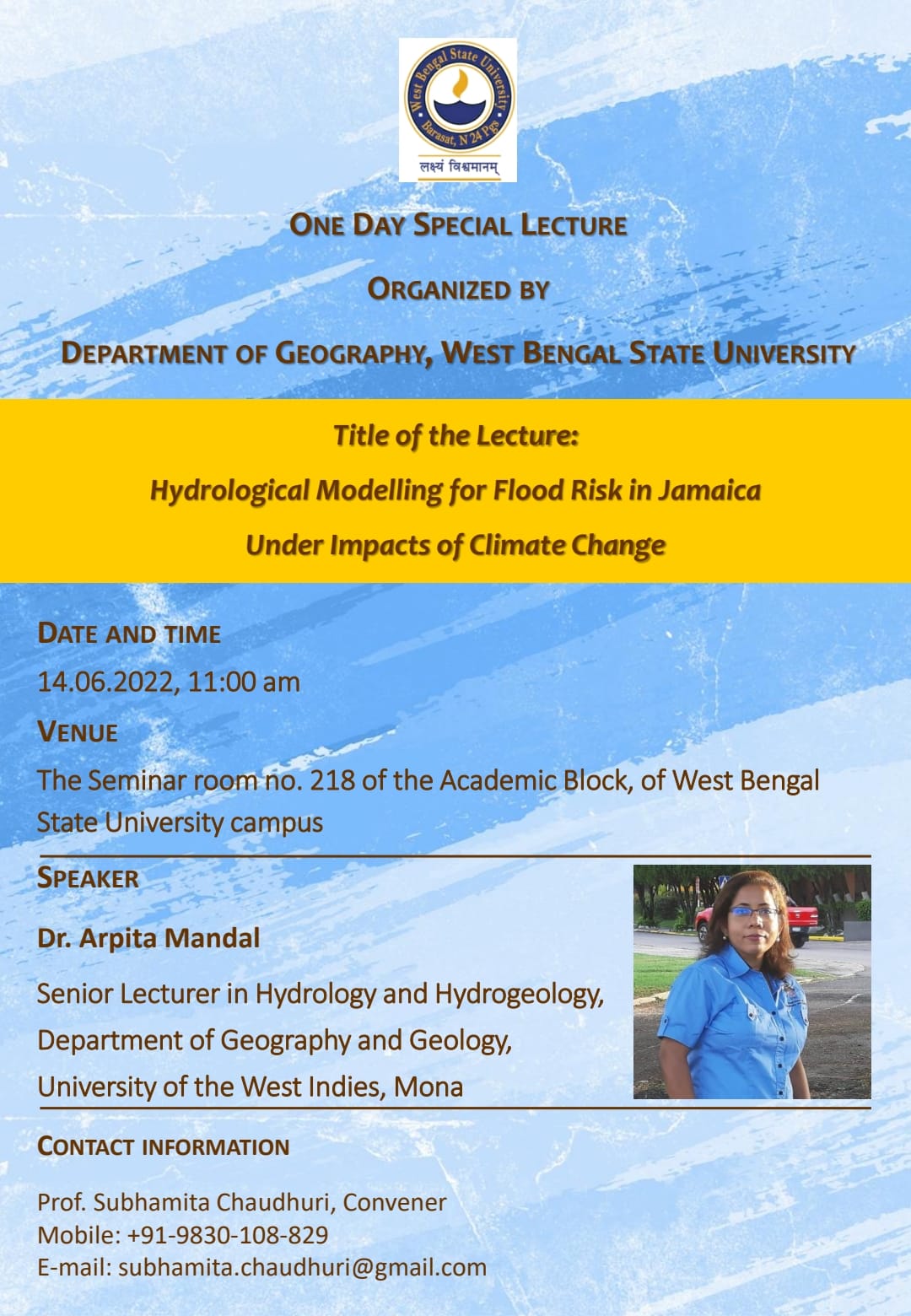 Dr. Arpita Mandal will deliver the captioned lecture on June 14, 2022 at the West Bengal State University at 11:00 am local time in Bengal. 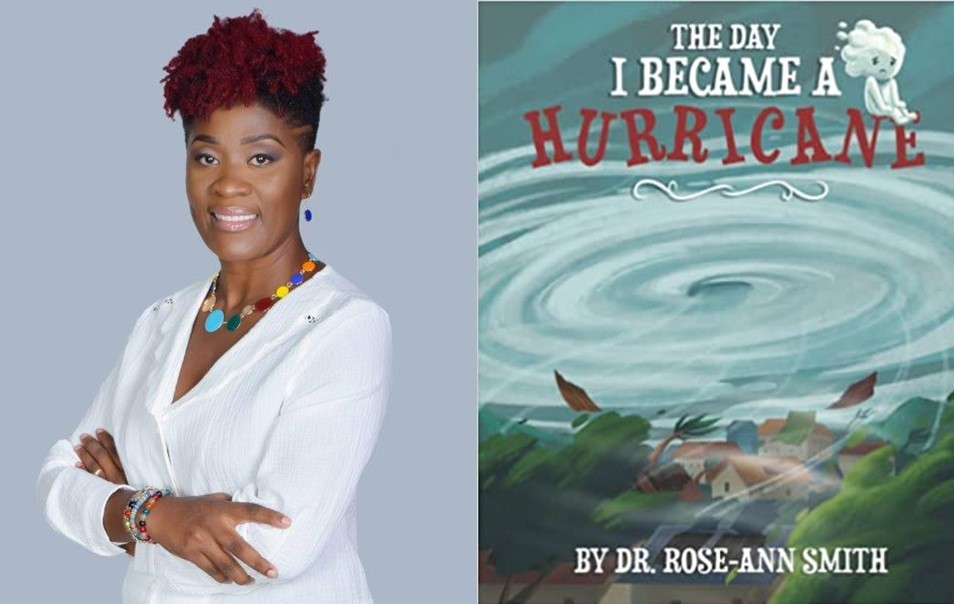 Congratulations to Dr. Rose-Ann Smith on the recent publication of a children's book on hurricane formation, development and impacts. The book is available on Amazon in both paperback and kindle formats.
https://www.amazon.com/dp/9769689912?ref_=pe_3052080_397514860 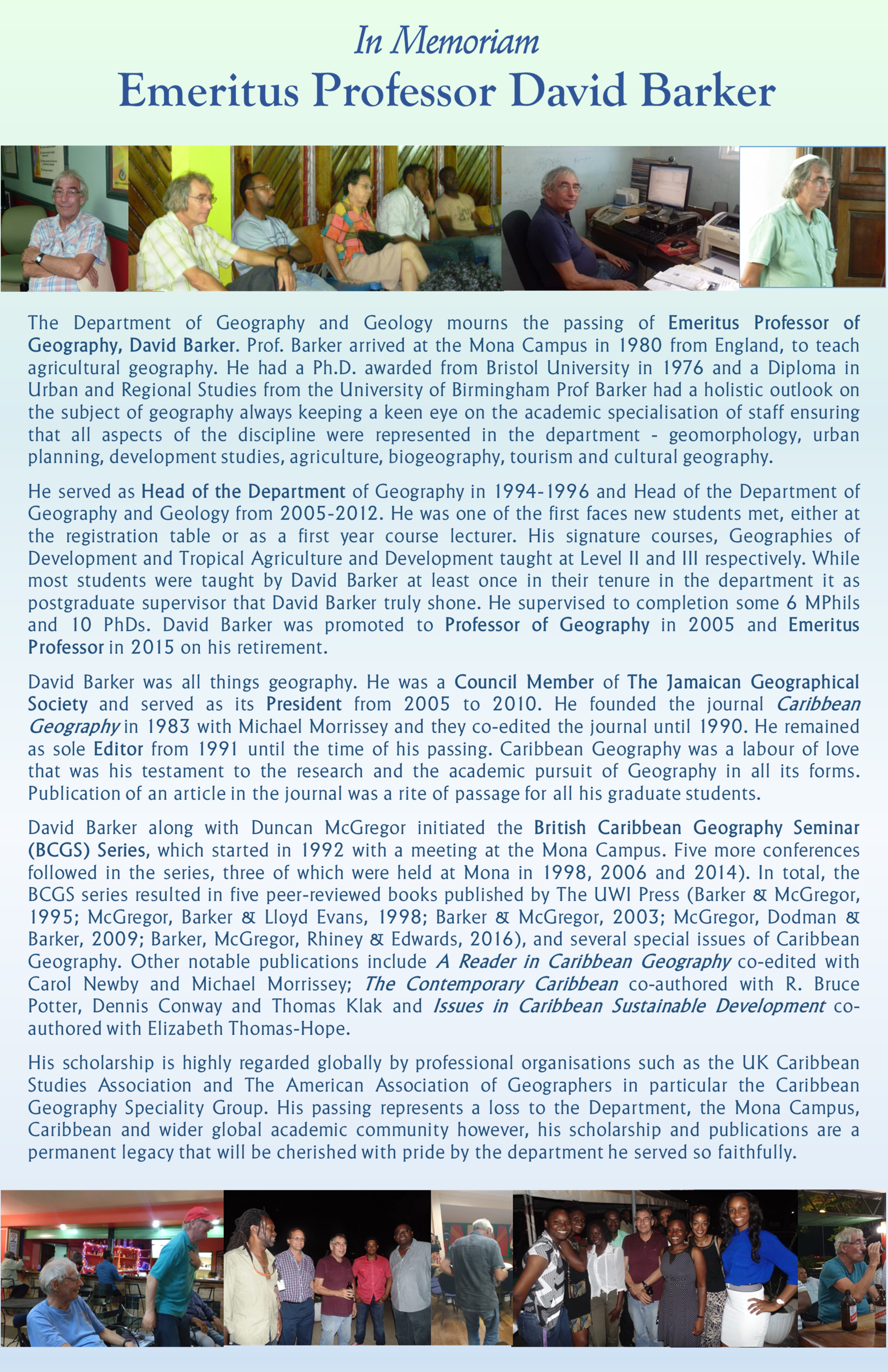 The Department of Geography and Geology mourns the passing of Emeritus Professor of Geography, David Barker. Prof. Barker arrived at the Mona Campus in 1980 from England, to teach agricultural geography. He had a Ph.D. awarded from Bristol University in 1976 and a Diploma in Urban and Regional Studies from the University of Birmingham Prof Barker had a holistic outlook on the subject of geography always keeping a keen eye on the academic specialisation of staff ensuring that all aspects of the discipline were represented in the department - geomorphology, urban planning, development studies, agriculture, biogeography, tourism and cultural geography.

He served as Head of the Department of Geography in 1994-1996 and Head of the Department of Geography and Geology from 2005-2012. He was one of the first faces new students met, either at the registration table or as a first year course lecturer. His signature courses, Geographies of Development and Tropical Agriculture and Development are taught at Level II and III respectively. While most students were taught by David Barker at least once in their tenure in the department it is as postgraduate supervisor that David Barker truly shone. He supervised to completion some 6 MPhils and 10 PhDs. David Barker was promoted to Professor of Geography in 2005 and Emeritus Professor in 2015 on his retirement.

David Barker was all things geography. He was a Council Member of The Jamaican Geographical Society and served as its President from 2005 to 2010. He founded the journal Caribbean Geography in 1983 with Michael Morrissey and they co-edited the journal until 1990. He remained as sole Editor from 1991 until the time of his passing. Caribbean Geography was a labour of love that was his testament to the research and the academic pursuit of Geography in all its forms. Publication of an article in the journal was a rite of passage for all his graduate students.

David Barker along with Duncan McGregor initiated the British Caribbean Geography Seminar (BCGS) Series, which started in 1992 with a meeting at the Mona Campus. Five more conferences followed in the series, three of which were held at Mona in 1998, 2006 and 2014). In total, the BCGS series resulted in five peer-reviewed books published by The UWI Press (Barker & McGregor, 1995; McGregor, Barker & Lloyd Evans, 1998; Barker & McGregor, 2003; McGregor, Dodman & Barker, 2009; Barker, McGregor, Rhiney & Edwards, 2016), and several special issues of Caribbean Geography. Other notable publications include A Reader in Caribbean Geography co-edited with Carol Newby and Michael Morrissey; The Contemporary Caribbean co-authored with R. Bruce Potter, Dennis Conway and Thomas Klak and Issues in Caribbean Sustainable Development co-authored with Elizabeth Thomas-Hope.

His scholarship is highly regarded globally by professional organisations such as the UK Caribbean Studies Association and The American Association of Geographers in particular the Caribbean Geography Speciality Group. His passing represents a loss to the Department, the Mona Campus, Caribbean and wider global academic community however, his scholarship and publications are a permanent legacy that will be cherished with pride by the department he served so faithfully. 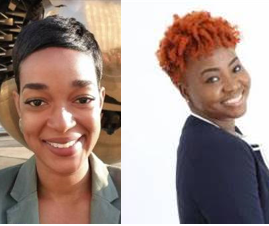 Jhannel Tomlinson and Ayesha Constable both graduates of the Department of Geography and Geology have joined forces to establish the Girls Climate Action for Resilience & Empowerment (GirlsCARE) programme.. The programme will initially benefit twenty-five young women in the Caribbean to develop their local and regional climate advocacy capacity and  improve their global reach. 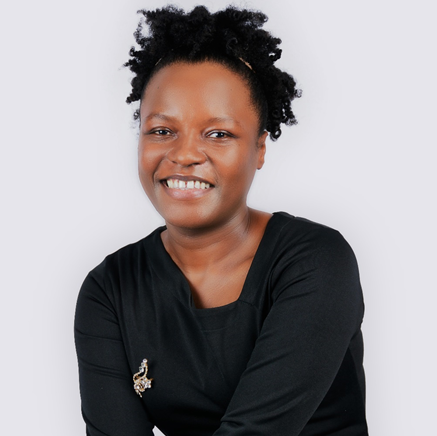 Dr. Birthwright was appointed a STeP (Science, Technology & Policy) Fellow on February 9, 2022. This appointment will support the establishment of the IAI Science Diplomacy Center through the Inter-American Institute for Global Change Research (IAI)
Anne-Teresa holds a BSc with a Major in Geology and a Minor in Geography (2012) and PhD in Geography (2019) from the Department of Geography and Geology in the Faculty of Science and Technology at The University of the West Indies, Mona. Her Ph.D. research in the Coffee industry and subsequent research is action-oriented targeting the development of solutions to reduce vulnerability, shape policy, and encourage sustainable livelihoods. She has worked with various local and regional multidisciplinary projects centered on reducing risk to climate change and improving the livelihoods of rural communities. 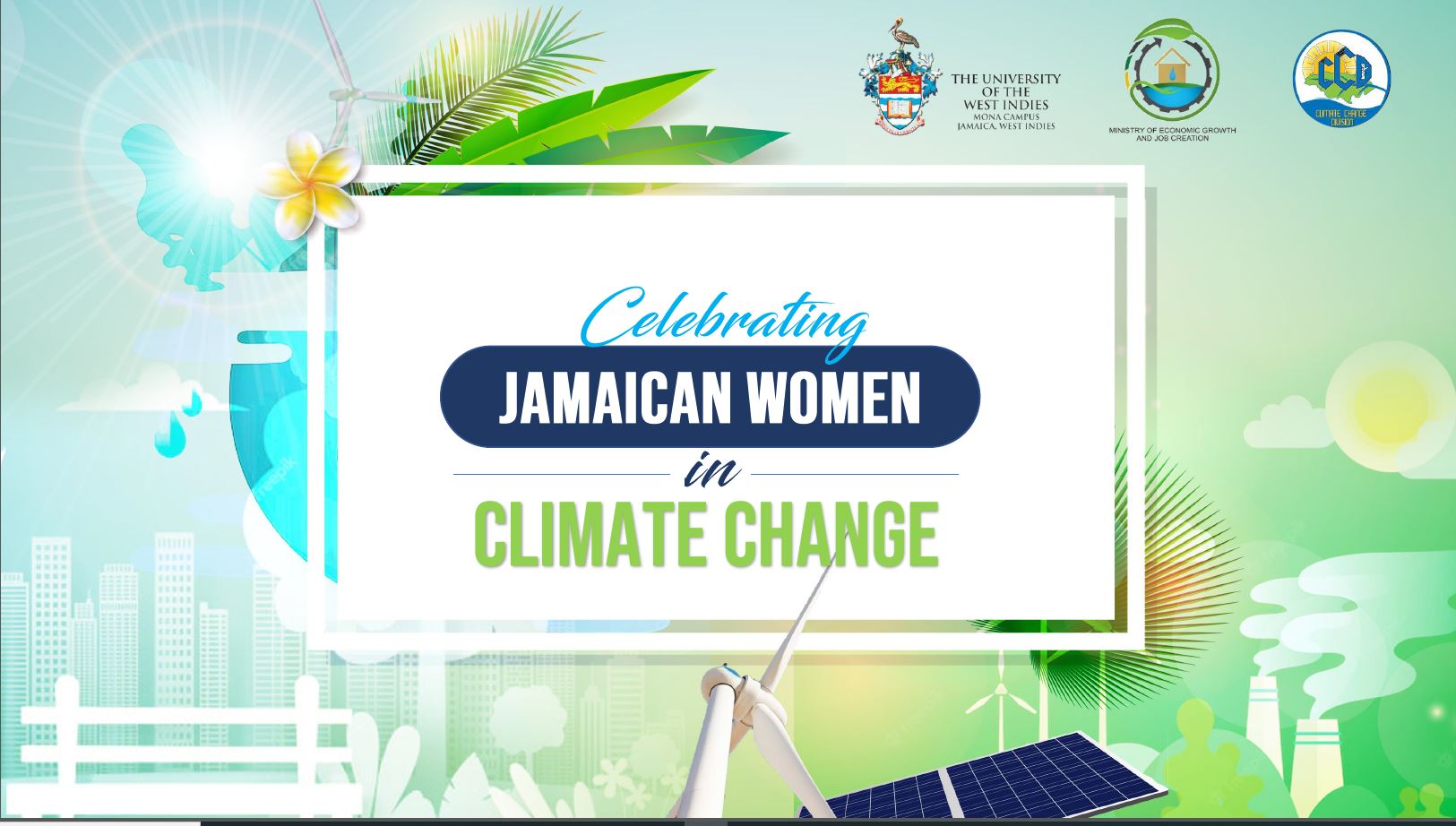 The Faculty of Science and Technology in collaboration with the Climate Change Division (Ministry of Housing, Urban Renewal, Environment and Climate) joined the global platform to recognise all women working in and serving as advocates for Climate Change. PhD students, graduates and current staff of the Department of Geography and Geology are are among thirty (30) Caribbean women featured in this publication highlighting thought-leaders advocating for societal resilience to Climate Change.
https://www.mona.uwi.edu/fst/sites/default/files/fpas/uploads/jamaican_w... 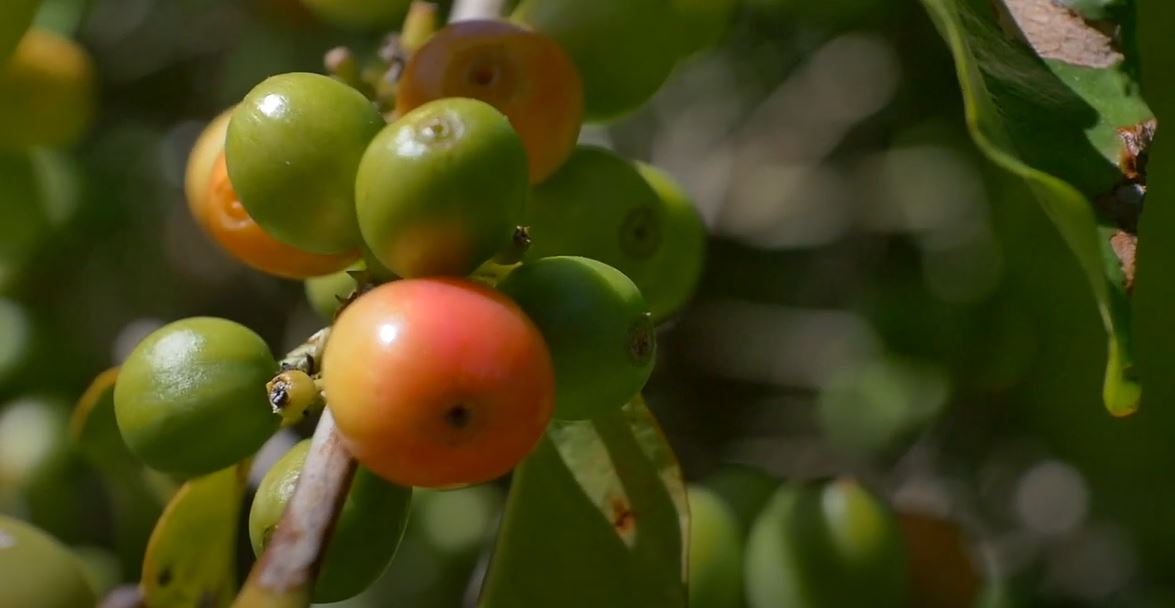 The JaWIC project with objectives to connect women in coffee, to recognize women’s contributions to the industry, and to empower a sustainable future where women have equal access to resources and the benefits of their labour recently closed. Links to a YouTube feature and full length feature are shared below. The project was led by Dr. Rose-Ann Smith and Dr. Anne-Teresa Birthwright Department of Geography and Geology Lecturer and Graduate respectively.
https://youtu.be/ua3hUIu5Az0
https://www.mediafire.com/file/aeuumacxuh9utkt/Jawic.mov/file 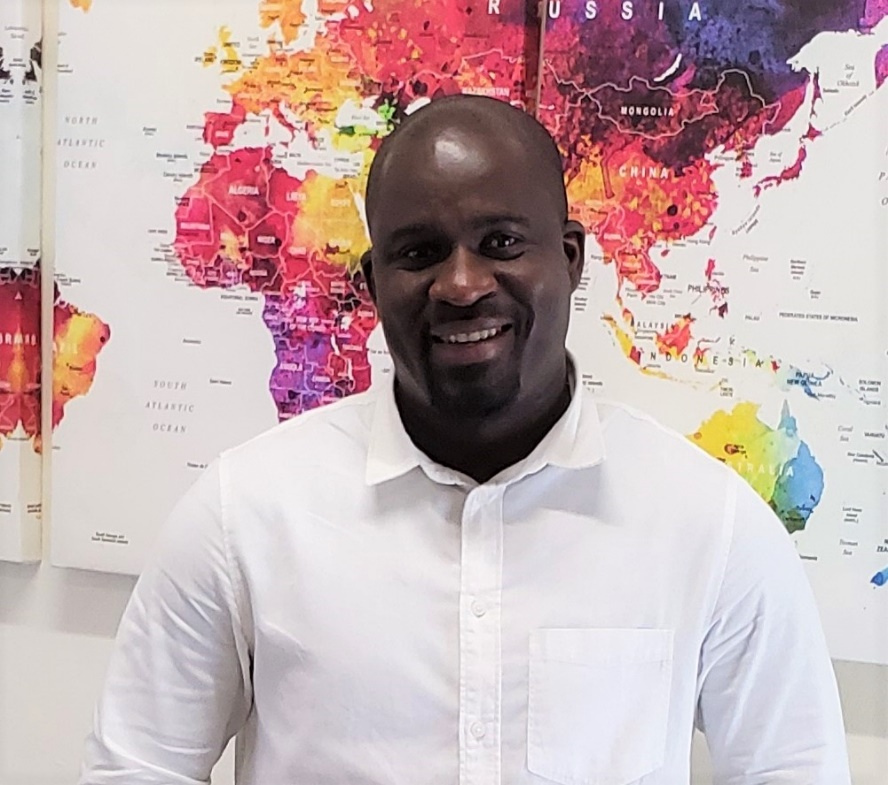 Dr Donovan Campbell, Senior Lecturer and Head of the Department of Geography and Geology at the Mona Campus and Dr Aidan Farrell, Senior Lecturer in Plant Physiology, Department of Life Sciences at the St Augustine Campus, are among a global network of researchers who have coauthored and published a Global Stocktake of evidence on human adaptation to climate change.
Dr Donovan Campbell noted, “This is the first paper to systematically investigate whether we are on track to adapt sufficiently to climate change. This was a massive undertaking involving more than a hundred global scholars which meant that the analysis benefitted from a wide range of perspectives and experiences. We are encouraged by the range of adaptation actions across communities, nations, and sectors to respond to multiple climate hazards. However, most of these actions were found to be incremental and insufficient to deal with severe climate change impacts.”
Read more about the study here:  Berrang-Ford, L., Siders, A.R., Lesnikowski, A. et al. A systematic global stocktake of evidence on human adaptation to climate change. Nat. Clim. Chang. 11, 989–1000 (2021). https://www.nature.com/articles/s41558-021-01170-y
Report also featured here: https://www.mona.uwi.edu/fst/earth-today-researchers-advance-priority-ar...

Congratulations to Dr. Rose-Ann Smith - Successful completion of the CUTL 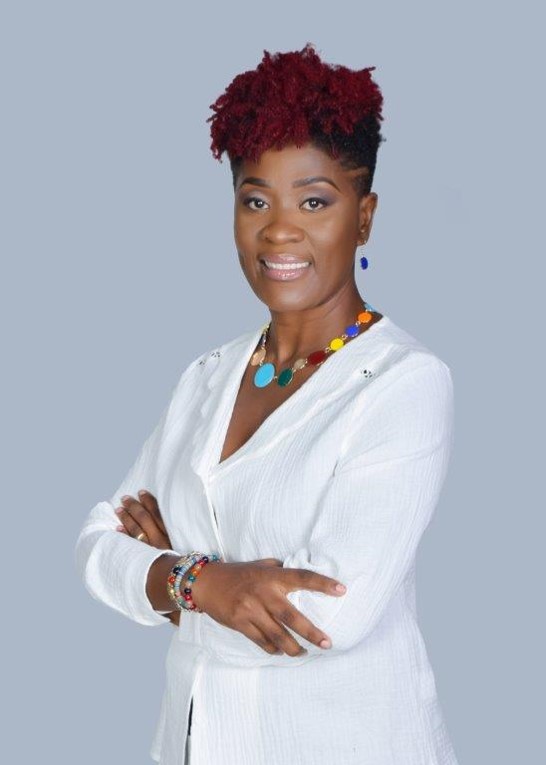 Dr. Rose-Ann Smith was one of four membrs of staff of the Faculy of Science and Technology that included Andrea Goldson-Barnaby (Chemistry), Phillipa Bennett (Computing) and Mr. Barrington Brevitt (Physics) in Cohort 10 of graduates who were awarded Certificates in University Teaching and Learning (CUTL) at a graduation ceremony held on November 5, 2021.
Dr. Smith joins her colleague Dr. Thera Edwards of Cohort 9 as a graduate of the CUTL, a flagship development programme for faculty of The University of the West Indies.
See linked article https://www.mona.uwi.edu/fst/four-fst-staff-awarded-certificates-univers...

Brown Bag by Learie Miller - Geography Education: The Foundation for a Lifelong Career