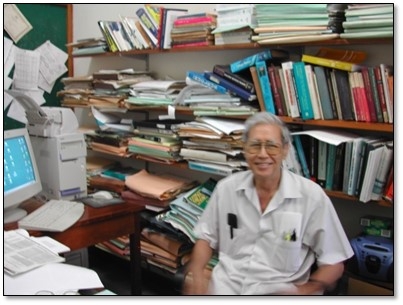 Emeritus Professor Anthony Chen is featured in the CARICOM Energy Personality Series - an activity of CARICOM Energy Month 2020. Read the full feature below which traces Prof. Chen's pioneering contribution to the Caribbean energy landscape.  To see others in the series check out: https://energy.caricom.org/

There is no doubt that the modern world requires evolved concepts and frameworks to combat the effects of climate predictions and projections within impacted socio-economic sectors. Globally, the lack of action threatens devastating consequences for future generations if the world chooses not to act quickly in the best interests of the environment.

In Jamaica, Dr. Anthony Chen has lived and worked through a number of eras in the Renewable Energy sphere that has undeniably taken his career to pioneering heights. A firm believer of analysing data to paint pictures that accurately reflect our reality, Dr. Chen has always been a proponent pf using research to always be relevant and applicable to regional development. His interests in Climatology, Physics, Environmental and Energy Studies and Meteorology are not simply academic instruments to spread awareness of global climate change due to global warming. For decades, Dr. Chen has displayed his selflessness and willingness to mentor young researchers to position climate change as an indispensable tool for national and regional development.

The face of climate change has undoubtedly changed over the last 50 years – making room for in-depth research and critical analyses that helps us to better understand the environment and patterns of human consumption have adversely affected the Earth’s condition. As a Small Island Developing State (SIDS), the stunning, tourism-centered island Jamaica has felt the effects of this phenomenon that has grappled with a carbon footprint that is not insignificant. Like many of his professional stature, Dr. Chen’s first foray into the world of science on the island began quite innocently – with a routine class visit to his high school’s laboratory. “Initially I wanted to be doctor, but the sight of dissecting animals was too much to handle,” Chen laughed. With a self-professed natural inclination to Mathematics and Physics, the award-winning research scientist dived head-first into the fascinating scientific world – leading him to pursue four tertiary-level degrees, including a Master’s in Teaching and a Doctorate in Physics from the University of the West Indies.

Chen’s love for his homeland is palpable, as he described the unique topographical qualities that makes Jamaica distinctive from the rest of the CARICOM Community. “We have our own weather system because of the hilly terrain. I remember my first open lecture at the University of the West Indies in 1968 was on solar energy; I always thought that if we had so much sun(light) we should be making good use of it,” he reminisced. A firm believer in studying Jamaica’s environmental origins for bettering the quality of life for its citizens, Dr. Chen’s work has always been positioned well ahead of the learning curve as it relates to climate activity and energy efficiency which, according to him, was accelerated due to a developmental crisis in the late seventies to early eighties. Originally, the reception to these new concepts and novel ideologies such as solar radiation, wind energy and solar water heaters were expectedly met with measured resistance, but Chen’s determination to learn more about the promising industry was unwavering. “I approached the (science and research arm of) the British Council for funding and they were very receptive. They saw that there would be value in studying wind (technology), so I conducted studies on the Eastern part of the island,” he explained. His research interests would eventually expand island-wide, with financial investments from the Ministry of Mining and Energy at the time.

Long before it became fashionable to do explore energy concepts, Professor Chen contended with investigating wind and solar energy feasibility in Jamaica early in his career during the 1970’s; carrying out stochastic simulations and forecasting of wind speeds; evaluating solar collectors and taking ground-based radiation measurements for evaluating solar power. Today, he considers Professor Michael Taylor and Dr. Tannecia Stephenson at the University of the West Indies (Mona Campus) to be two of his dedicated allies in the fight against climate change. “They have advanced all of the work that I have done; they are the leaders now in the climate change conversation,” he credited. These opportunities for collaboration are a fundamental characteristic of the research group that Dr. Chen founded in 1994, called the Climate Studies Group, Mona (CSGM). Together with the Department of Physics, the group has had mandates to investigate and understand the mechanisms responsible for mean and extreme climates in Jamaica and the wider Caribbean, including variability and seasonal prediction, climate extremes, models and respective impacts. By using this understanding to predict climate, Dr. Chen notes that it provides an opportunity to investigate, analyse and promote awareness of global climate change due to global warming. “The CSGM is now recognized as the leading research organization on climate change in the Caribbean – so that they have been getting grants for climate resilience and to create databases that can spread information around the region,” the now-retired professor explained.

Joining the international conversation on climate activity as a member of the Small Island Developing States (SIDS) has been made much easier thanks to the recognition for the impactful work being done by CSGM. It is that continued spirit of collaboration that has brought great rewards to this Atmospheric Physicist. In 2007, Dr. Chen received the honour of a lifetime with a joint awarding of the prestigious Nobel Peace Prize, for valiant efforts made to increase and greater knowledge of man-made climate change and to set the critical groundwork for the action required to address and counteract these changes. The supreme commendation, which was as a result of his research contributions to the Intergovernmental Panel on Climate Change (IPCC), was also awarded to former United States Vice President, Al Gore that year. For him, the spirit of collaboration is the ultimate investment, noting that “for the bigger Caribbean picture, it was an honour to have three Caribbean scientists involved in that IPCC project – Professor Nurse in Barbados and Professor John Agard in Trinidad and Tobago – and to have our regional voice heard as members of the Small Island Developing states alongside other affected communities such as the Pacific Islands and Maldives.”

For Dr. Anthony Chen, education is rooted in altruism and he has discovered great joy in the science of teaching. A Professor Emeritus, he surmises that teaching is something that’s just natural to him, saying, “I often circumvented the regular procedures of lesson-planning, because there are moments where what you wanted to impart to the students is the knowledge and hoping that they will keep that,” he explained. Knowledge transfer continues to be Chen’s academic development drive, having recently had a paper published on pathways to 100% renewable energy in the renowned Renewable and Sustainable Energy Reviews. This academic research, written in collaboration with A.J. Stephens, R. Koon Koon, M. Ashtine, K. Mohammed-Koon Koon looks at recommended action that can be taken over the next five years to replace fossil fuels by renewable sources, thereby economically achieving energy security and satisfy The Paris Agreement to limit temperature rise as close as possible to 1.5⁰C, in an economically beneficial manner.  It directly addresses some of Jamaica’s renewable energy options (such as battery storage, solar and wind intermittences), provides assessments of Jamaica’s energy needs, maps available sites and takes an integrational approach to the island’s renewal resources. Such information is indispensable to feeding into socio-economic analyses that affects such areas as increases in human capital, generating low-level skills in the workforce, and the general potential of the ‘Blue Economy’. “All 17 Sustainable Development Goals under the United Nations are related to climate change,” Chen emphasized. “Unless you control the climate, none of these other aims will be successfully achieved. Floods, droughts, lack of water resources, rising sea levels… they affect lives and livelihoods.”

Dr. Anthony Chen stresses on the social implications of climate change and activity, shining a light on the social acceptability, education and security of equipment and personnel, which work hand-in-hand with laws and policies that help to model technical pathways for future applications. For him, making the government more aware is key for stakeholder participation and creating public awareness is an important tool to help appreciate the wide-scale realities of climate change. “There are things that you can give younger generations, but to get them to appreciate the action is a more difficult concept. Teach them how to behave in a right, environmentally-responsible manner so that they understand what is happening. There are other steps involved… but we have to make the first step.”

This article is part of the CARICOM Energy Personality Series, an activity of CARICOM Energy Month 2020 and is produced by the CARICOM Energy Unit, the Caribbean Centre for Renewable Energy and Energy Efficiency (CCREEE), and the European Union (EU) and the German Federal Ministry of Economic Development and Cooperation (BMZ) funded, Technical Assistance Programme for Sustainable Energy in the Caribbean (TAPSEC). The series aims to give recognition to regional energy champions who have made exceptional contributions in the areas of renewable energy, energy efficiency, energy access, resilience, and rural electrification throughout the Caribbean Community. To read more features within the series, please visit us at https://energy.caricom.org .