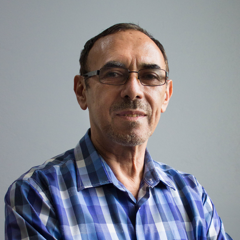 The University of the West Indies (The UWI) recently approved the recommendation to confer the title of ‘Emeritus' on Professor in Applied Nuclear Physics, Mitko Voutchkov.

Professor Mitko Voutchkov served The UWI Mona for 22 years up to his retirement, first at the International Centre for Environmental and Nuclear Science (ICENS) (1993-2006) and then in the Department of Physics (2006-2015). He still serves The University Hospital of the West Indies (UHWI) in the capacity of Consultant in Nuclear Medicine and Radiation Safety, and through his involvement in curriculum development and research supervision in the Department of Physics. Among his significant contributions to the region is the development a cadre of Medical Physicists through the BSc., M.Sc., M.Phil and Ph.D programmes in Medical Physics which he pioneered in the Department of Physics. Over 200 undergraduates and 50 M.Sc. students have graduated since their inception.

Professor Voutchkov established a robust research programme focused on the medical and health physics, and the promotion of nuclear science as a solution to agriculture, industry and health challenges in Jamaica. He has published over 80 papers in peer-reviewed journals, 2 books, 2 book chapters, 33 refereed conference proceedings and 34 conference papers, abstracts and posters, and holds 2 patents. He has supervised over 50 M.Sc. and 12 PhD/MPhil Medical Physics students. His work has included the characterization of Jamaica’s background radiation profile including the mapping of Jamaican soil; characterization of Radon in household water and mineral springs and Radon modelling of cave systems; the development of cheap, active radon detectors; the exploration of heavy metal effects on chronic kidney disease; and causes of lead poisoning in children; investigation of prenatal mercury exposure; and elemental composition of food packaging and plastic bottles. Professor Voutchkov also attracted numerous grants including from the International Atomic Energy Agency (IAEA) who considers him one of their regional experts.

Professor Voutchkov is the recipient of numerous UWI awards including the Principal’s Research Awards for the Best Research Publications (2006, 2020), Most Outstanding Researcher (2018), and the Research Project Attracting the Most Research Funds (2012). He is also the recipient of the Association of American Publishers Book Award 2006 in the "Geology/Geography" category for Excellence in Professional and Scholarly Publishing; British Medical Association Book Award 2005 in Public Health category, and the Gleaner Honour Award for Excellence in the category “Science and Technology”, 2002, Kingston, Jamaica.

The Faculty is proud of Emeritus Professor Mitko Voutchkov. Congratulations!