FST Grad did Exam while in Labour 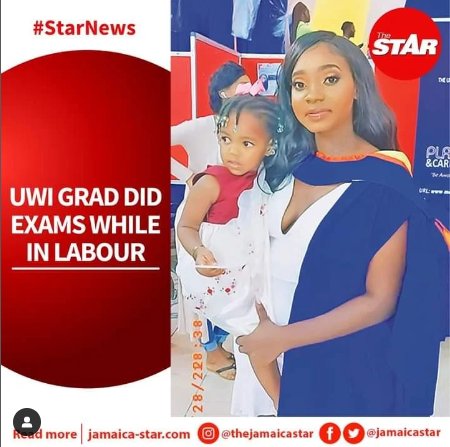 "I went into labour on December 15, 2020, and the exam I did while in labour was a bio-energetics, and I got a B+ for it. It was an eight-credit course at UWI. Final exams had just started, and I was preparing straight up to the time. I had baby 8:46 a.m., and the following day, I went home in the afternoon and did another examination," Simpson revealed.

At the time, Simpson was preparing to enter her third year of her biotechnology degree, a dream she has held on to since she was a student at the Foga Road High School in Clarendon. Instead of giving up on her dream of attaining a university degree, which would make her the first in her immediate family to do that, Simpson worked assiduously towards the goal.

"I found out I was pregnant in March 2020, when COVID-19 just started. I was shocked, I was crying, I had mixed feelings. I wondered how I was going to do this [complete a degree and raise a baby], but God assisted me, and I decided that I would carry the baby. I didn't want to sit out that year because I needed to provide for my child," she told THE STAR.

She said that terminating the pregnancy was not even a consideration.

"I am actually glad that I didn't because I graduated with my daughter. She is also a graduate. She has been a part of my studies from conception to birth. She, basically, got used to some of the lecturers' voices. This degree is for both of us," Simpson said, the excitement evident in her voice.

The 24-year-old admitted that studying in her final year became difficult as she was juggling academics, financial difficulties, and a newborn. Although classes shifted to an online modality, Simpson sacrificed early mornings to keep abreast of the readings and labs that her course required.

Now having graced the stage at the UWI class of 2022's graduation ceremony on November 4, Simpson described her latest accomplishment as a testament to her faith in God.

"It is basically the beginning of great things for me, and I feel like God has, basically, tested my faith in a certain way. Yes, it has truly humbled me, and I would love to motivate and encourage other young girls to let them know that these things are possible. Whether or not you have the support, you can do it. You are able to beat all the odds," the May Pen, Clarendon, native said.

Source URL:
UWI Grad did Exams while in Labour