Ginnel ‘Speedie’ Peart's ‘walk’ to Success | A Story of Resilience and Perseverance! 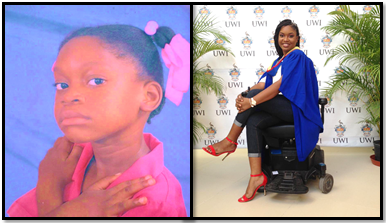 Photo: Ginnel Peart then, at age 6 (left), and now, early twenties, on the ocassion of her graduation (right)
Photo credit: Ginnel Peart

Ginnel ‘Speedie’ Peart, the eldest of three girls for both her parents is a first generation university graduate who enrolled in the Faculty of Science and Technology to pursue an Undergraduate degree in 2015. Little did she know that her ‘walk’ to success would be at a slower pace than she would have hoped due to an existing disability, Muscular Dystrophy that sadly seemed to have dictated a life expectancy not exceeding thirteen years. But even then Ginnel was not to be deterred...

Ginnel was born a healthy child but gradually became ill. By Grade 9 she had undergone two operations, one being scoliosis correctional surgery. Her medical maladies led to her attending six educational institutions by Grade 12. Sixth form proved most challenging for Ginnel as she tried to independently own her mobility. Thankfully, she was supported by three friends who became her support system.

Ginnel transitioned to The University walking independently, however, this was short lived. She recalled the first year being extremely difficulty as in addition to failing some courses, she had to walk from the Irvine Hall back gate to classes. The distance was approximately a ten-minute walk and as such she would be late for classes as she had to make multiple stops. The Office for Special Student Services (OSSS) intervened and loan her a scooter which birthed her the name, 'Speedie' that she proudly owns to this day. “Being physically challenged and in Science and Technology was no joke but my Department, Life Sciences helped me to navigate the space,” said Ginnel. The Department has many staircases so on days when it was difficult for her to walk she would be readily assisted by Jermaine Williams (Service Staff, FST) who would take her to classes, and as if that wasn’t enough, he ensured that he often cleaned her chair of vegetation. She further reminisced, “When the road was flooded and I was stuck on the ‘Spine’ he packed my chair up and got me to OSSS so I could get home safely….I am forever grateful for his friendship and support.”

Ginnel lost sensation in her legs during her Undergraduate years and failed a few courses. Despite the difficulties encountered, Ginnel re-pivoted and committed herself to achieving excellence. Her resilience and perseverance saw her ‘walking’ to success as she was awarded a BSc in Animal Biology (major) and Psychology (minor) that was celebrated at the virtual graduation Ceremony in November 2021.

Ginnel offers the following advice, “I would say to any person that has a disability and wants to pursue their degree in the Faculty of Science and Technology, go for it. As long as your studies will not adversely affect your existing disability, be limitless in your own right. The Faculty of Science and Technology is willing to help you achieve your greatness". The Faculty proudly celebrates Ginnel’s achievement and wishes her all the best!