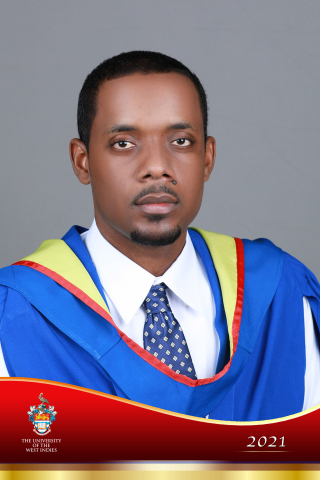 Michael Goldson, a native of St. Mary was enrolled in the Faculty of Science and Technology, The University of the West Indies, Mona Campus in 2017. He was awarded a Bachelor of Science degree in Computer Science (Major) and Economics (Minor) with First Class Honours in 2020-2021. Michael graduated having the highest Grade Point Average in his cohort.

Michael commenced his academic journey as a part-time student working full-time in the field of finance and accounting at a local company for four years. So, why did Michael pursue Computer Science while working in the field of accounting? Simple, he went back to his first love. This was made possible through him attaining greater financial independence. Balancing work life and studies posed a great challenge for Michael but sheer dedication and the perpetual ‘burning of the midnight oil’ was the foundation of his success. Furthermore, academic counseling and consultation sessions provided by the lecturers during and outside of office hours allowed him to set and evaluate his academic goals and aligned his studies with his professional endeavours. The Department’s support coupled with that of his family, friends and colleagues made it possible for him to remain focused on his tertiary journey.

Michael can be regarded as a lover of knowledge and learning. This was exemplified when he received the Dean’s Honor Roll award for three consecutive academic years (2017/18, 2018/19, 2019/20) and an academic commendation (2020/21) from the Faculty of Science and Technology. He shared that his most memorable experience was receiving his first award for being placed on the Dean’s Honor Roll as this was an indication that he was earmarked for academic excellence, irrespective of existing challenges, success was within reach. These accomplishments he said, “came through resilience, strict discipline and determination”.

Currently, Michael is looking forward to employing the knowledge and experience gained during his studies in his current role as a Software Engineer. Outside of academics, his hobbies include football and playing games.

Michael’s advice to current students is to “utilize available resources such as tutorials, study groups, office hours and academic counseling sessions provided by their department and the faculty. These resources will lead to success in the coursework component of each course which will in turn lead to overall academic success”.