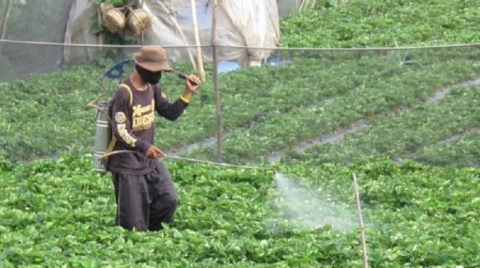 Jamaica imports between 2.7 to 3.5 million kilogrammes of pesticides each year, with more than half being used in the agricultural sector. Jamaica’s pesticide consumption is several times higher than the world average and is driven by a strong feeling that pesticides represent the first and sometimes only option for dealing with agricultural pest populations. Unfortunately, many of the pesticides currently being used in Jamaica are listed by the Pesticide Action Network (PAN) as Highly Hazardous Pesticides (HHPs) because they pose high levels of acute or chronic hazards to the health of humans and the environment. A recent study by Nadia McDonald, Machel Emanuel and Dwight Robinson from the Dept. of Life Sciences published in Horticulture International Journal suggests, however, that biorationals or biopesticides (pesticides that cause relatively no harm to humans or animals and do little or no damage to the environment could) may be better alternatives to HHPs now commonly being used. The study titled “The efficacy of alternative (biorational) insecticides in suppressing damage caused by insect pests affecting callaloo, Amaranth xanthosoma and pak choy, Brassica rapa, production in Jamaica” showed that for the two popularly cultivated and consumed leafy vegetables (Callaloo and Pak Choy) pest management using biorationals was comparable to HHPs, with no reduction in market yield. In fact, there were times when intervention with pesticides may be absolutely unnecessary and have the opposite effect of worsening of the pest problem.

The study emerged out of a partnership between the Food and Agriculture Organization (FAO) of the United Nations and The UWI, Mona aimed at minimizing the risks to the Jamaican population and environment from the overuse of HHPs and to identify less hazardous pesticides that could be used. A significant challenge with pesticide usage is that they can persist in the environment and eventually be transported to soil and aquatic ecosystems, even some distance from where they were initially applied. In those habitats they negatively impact the survival and reproductive potential of the organisms that live there and may also eventually make their way into the human food chain. Studies done by the Pesticides Control Authority (PCA) between 2009 and 2014 detected pesticide residues in 11% of locally sampled fruits and vegetables. The results of this study are important as they provide the scientific underpinning for efforts to promote within the region the use of biorationals as an alternative to more harmful pesticides.

To find out more about research in the Department of Life Sciences: https://www.mona.uwi.edu/lifesciences/