A look at the Non-Traditional Sport of Rugby

Rugby one of the many non-traditional sports of the Caribbean has found a home in the University of the West Indies and continues to spark the interests of prospective players, investors and in general fans seeking an alternative sport for competition or leisure. The desire to see the sport developed in Jamaica exists, however for many the little knowledge that they have of the sport is somewhat a deterring factor and hence results in a small number of persons investing in the sport. Rugby at the moment does not have a large fan base or a large pool of athletes to choose form overall.

Hence, one would like to believe that shedding some light on Rugby’s history and the UWI’s achievement in the sport may spark some interest in the area. 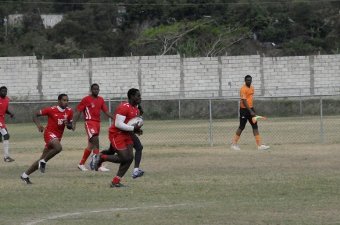 The sport which has ancient roots in England is said to be based on a combination of soccer and American football techniques. A famous legend surrounding the sport is that of William Webb Ellis. It is said that while in a game of a type of mob football, Webb took up the ball and ran with it, all with the intention of getting to the goal. Many persons thought that that was a good technique and it is believed that it was from this point that the sports got its inception and further developed. This legend is however, not certain, nonetheless, for over 40 years there has been a prolonged as to whether the ball should be carried or kicked. The first Rugby club was formed at the Cambridge University in 1839 and attempts were made to formalize rules for the sport. The secretary of the Richmond Rugby Club, Edwin Ash, met with some 22 clubs where the 59 laws of Rugby were developed. Rugby later developed to being one of the most followed sports in the English culture; it has been ranked and compared to the sport of cricket. Hailed as one of those sports that fathers would want their sons to get involved in, rugby was said to hone certain attributes associated with being a gentleman. Rugby, received bad publicity after a Richmond player was killed in a practice match in 1871. At this point after many years the Rugby School in England decided that they would not include the tactic of hacking (which was to basically hit down a player and hit him in the shins) anymore in the sports. It later moved from being an elitist sports to one that was played by persons of all classes. Since the birth of Rugby, there has been a split between the league Rugby and Union Rugby and these two have different rules attached to their playing.

AREAS IN RUGBY AND THEIR DIFFERENCES

The game of rugby one may say has more technicalities in comparison to its ‘brother’ football. The aim of the game that through the carrying, kicking and grounding of the ball one team tries to score as many points to win the games. A rugby team consists of fifteen players the difference however exists in the two versions of the sport; Rugby League and Rugby Union. Although different in tactics the concept is the same. In Rugby League for example, whenever, an opponent tackles a player the referee halts the game and restarts when the tackled player is standing, puts the ball in the center and rakes it back with his foot to the player behind (this player is called the dummy player). The opposing team has to remain ten (10) meters away from the play-of- the-ball except for two markers who line up in front of the player of the ball. This is only allowed to happen five times during the match; a sixth time would see the opposing team being handed the ball. In rugby league a tackle stops play but in rugby union play continues with a ‘ruck’ or ‘maul’ where players from either side lock together and push against those of the other side for territorial advantage or for better position over the ball. This requires players to be bound together (holding on to each other); this is why they must use their arms in the tackle. This many may say make rugby union more technical than rugby league. The interesting thing for spectators at this point in the game is to see which of the teams will successfully get out of this hold with the ball and to try to make it to the goal again. 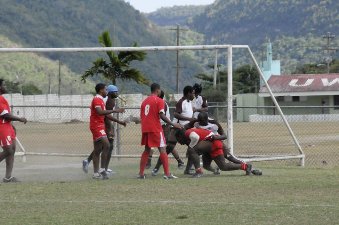 THE UWI AND RUGBY

The University of the West Indies involvement in the sport is relatively new. The sport is heading into almost two years existence at the Mona Campus. The team has achieved much for itself since its inception here at the university. The University of the West Indies Rugby team is one that operates as a league and not a union. The team has won the 2010 Jamaica Rugby Association Championship Title and in addition they are the 2011 Intercollegiate Rugby Champions. There is no doubt that this sport will continue to gain momentum here on the Campus.  The Rugby team is at this point in time coached by Gary Mahfood, who was the recipient of the coveted ‘coach of the year’ award by the University of
the West Indies Sports Department in their annual Sports Awards Ceremony held on September 2011. This was heavily influence by the résumé of winnings achieved over the year. The UWI Mona Pelicans in one of their earlier encounter to kick start the season, trampled Portmore Community College on February 1, 2012 in a game that ended with UWI the victor of 78-6.The team is anticipating a great season for UWI Mona and are looking forward to any opportunity to regain their position in the game as champions.

The sport continues to develop in the University and it is the hope that a greater understanding of the sport will be developed thus heightening a greater level of appreciation and a willingness to participate in, be entertained by and even invest in this sport which builds character, esteem, discipline and team work.

Sports Department of The University of the West Indies Jamaica

Send us a message