The UWI Mona Table Tennis Team led by Coach Sandra Rettie, are the 2011 winners of the Intercollegiate Womens' Competition, after a 'smashing' win over arch rival UTECH on Thursday, November 17, 2011 on the Knight's Home ground. The team was poised for victory after 'blocking' GC Foster, Mico University and UTECH in the preliminary rounds leading up to the finals.

The all star Pelican team comprised of Jamaica National Representatives Yvonne Foster, Tracy-Ann Dattadean and Shanique Clair and fellow UWI Mona  ally; Anita Mahadeo and Antoneil Kirkland. Kirkland and Mahadeo however, had no need for their 'two-step footwork' as it was business as usual for the 'triple threat' of Foster, Dattadean and Clair who ensured a 3-0 win which would see UWI Mona being 'served' the Championship Trophy yet again to retain their title. 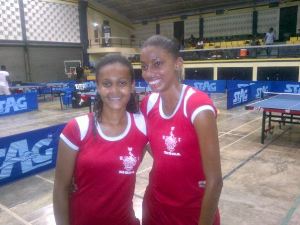 Meanwhile, the singles would see a faceoff between teammnates Tracy-Ann Dattadean and Yvonne Foster;who is ranked number 1 in the island in her category. The evening  however after much smashing, blocking, spining and fancy footwork; would see Dattadean walking away the victor after a heated 3:2 game.

By and large UWI Mona in both the singles and team category continue to dominate the Table Tennis Arena and we have high expectations for our Pelicans, as they continue to soar.

Sports Department of The University of the West Indies Jamaica

Send us a message