Gender is a concept that explains the socially determined differences and meanings attached to masculinities and femininities and influences the everyday life experiences of males and females. This can include: access to jobs, education, power, resources, and decision-making. Gender is used globally as a tool of analysis to identify and address gaps in resources to achieve equality. Gender analysis can be used in various sectors to enhance the impact and effectiveness of development policies, programmes and strategies. Gender and Development is an interdisciplinary field of study that uses gender as a category of analysis to understand, challenge and change social, economic, political and environmental inequalities that undermine human rights and sustainable development.

The IGDS was first established in 1993 as the Centre for Gender and Development Studies. In 2008 The University of the West Indies upgraded the Centre to achieve Institute status, able to grant its own degrees. The Major in Gender and Development was also introduced at Mona in 2008. Today the Institute is a well-established multi-disciplinary and interdisciplinary department of The UWI with four (4) Units; a Regional Coordinating Office (RCO) located in the UWI's Regional Headquarters and three campus units: The Mona Unit (Jamaica); the Nita Barrow Unit (Barbados) and the St. Augustine Unit (Trinidad & Tobago).

The University of the West Indies (The UWI) developed a Gender Policy to formalize its commitment to gender justice and to establish a framework for its implementation. The UWI Gender Policy was launched on May 22, 2018 at a formal ceremony at the University's Regional Headquarters in Jamaica followed by a public forum on Gender justice.

The IGDS Mission is to produce and disseminate knowledge on gender-related issues in the Caribbean, in support of the UWI's mission and Caribbean development goals.

The IGDS Vision is that in the future, all UWI graduates are trained, equipped and committed to promoting gender-sensitive development in all sectors.

2013 The CGDS celebrates two decade of institutionalization with the University of the West Indies structure. 20th Anniversary Conference in honour of Professor Barbara Bailey is convened from November 6-8, 2013 on St. Augustine Campus: Continuities, Challenges and transformation in Caribbean Gender Relations. 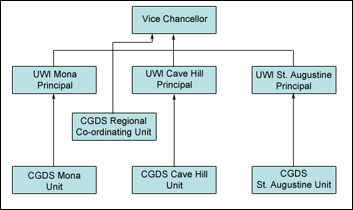 The Institute for Gender and Development Studies is not attached to any faculty. It is an independent institute in the university - a decision taken to underline its relevance to all disciplines and to facilitate collaboration with all faculties.

IGDS consists of four (4) Units: a Regional Co-ordinating Unit (RCU) located on the University's Mona campus, and three Campus Units - at Cave Hill, Barbados; at Mona, Jamaica; and at St Augustine, Trinidad & Tobago. Gender Boards of Studies, chaired by the Heads of the Campus Units, function like Faculty Boards, with membership comprising staff of the Units, representatives from Faculties, the UWI Library, the student body, and co-opted members. 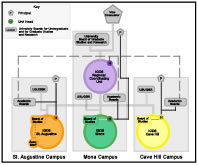 The Heads of the Campus Units are members of the respective campus Academic Boards. IGDS staff represent the Institute on selected faculty boards and other boards/committees on each campus. The Institute also attends meetings of the Board for Undergraduate Studies (BUS). The University Director of the Regional Co-ordinating Unit is an ex-officio member of the three Gender Boards of Studies.

The IGDS reports to the Vice Chancellor through the IGDS Regional Co-ordinating Unit. Campus Units report to the Campus Principals and the respective campus Academic Boards.

The specific objectives of the Institute are to:

IGDS is committed to a programme of teaching, research and outreach that:

The IGDS will achieve its mission and vision by developing and delivering multidisciplinary academic programmes that are characterized by excellence in:

Teaching guided by feminist and gender & development theories, principles & methodologies and academic courses and programmes that respond to emerging gender and development issues in the Caribbean

Research that investigates social, economic and political problems from a gender perspective and finds solutions to address the differential development needs and realities of males and females in Caribbean countries

Outreach/Public Service and Activism that promotes awareness of gender, transforms gender relations and builds capacity to mainstream gender in development policies and programmes