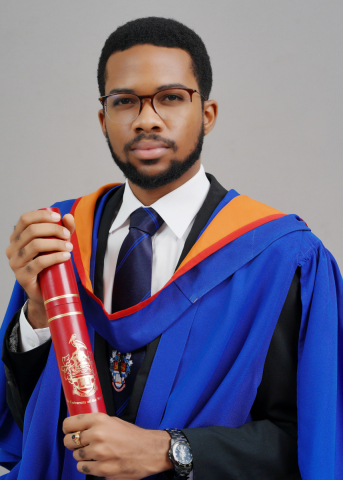 Guided by his grandfather’s maxim, “The word 'can’t' does not exist, remove it from your vocabulary,” David has sought to take on new frontiers with confidence and determination. When he first stepped through the gates of The UWI, Mona, David was a student of the Faculty of Law who just graduated from his alma mater, the Wolmer’s Boys’ School. Little did he know at the time, that law was not to be his final destination. Less than two weeks after starting, he decided to transfer to the Faculty of Social Sciences to pursue a BSc in Public Policy and Management. This decision changed his life and David has never looked back.

David also took a keen interest in campus life as he pursued his talents to the fullest. He served as Vice President of the UWI Debating and Public Speaking Society in the 2020/2021 academic year where he organized the society’s first successful online award ceremony. He was also a part of the Faculty of Social Sciences Honours Society and the Society for Future Policy Leaders. He brought recognition to the university as he was the Best Debater at the 2022 JADE Debate Academy and Open (JDAO) competition.

Additionally, he was a part of the winning team that successfully defended their title in the JADE National Collegiate Debating Championship (NCDC) for both 2021 and 2022. He received the award for the best debater in both competitions. Additionally, he represented the university in the World Universities Debating Championship in July 2021. For his performance, David received the JADE Debater of the Year Award (2019 – 2020) and the UWI Certificate for Outstanding Performance in Culture for the field of Debating (2022). David also represented the UWI at the Harvard Model United Nations competition which was held in Boston (February 2022).

David is a prolific writer and award-winning journalist who frequently published articles in the Daily Gleaner. Throughout his time at the UWI, he wrote over 250 news stories and columns that tackled thorny issues or proposed solutions to pressing problems in society. In 2019, while in his first year at university, he was the recipient of the Press Association of Jamaica (PAJ) Morris Cargill Award for Opinion Journalism 2019 at age 19. He has been shortlisted for this award and the Young Journalist of the Year Award each year since then. Moreover, he was the winner of the Chancellor Hall’s essay competition in 2020 and the Jamaica Special Economic Zone Authority Essay Competition in 2021. While this year, he presented at the West Indies Economic Conference hosted by the UWI Department of Economics and Caribbean Studies Association (CSA) Young Scholars Dialogue which was held last year.

Due to his efforts to relaunch the Jamaica Prefects’ Association, David was awarded the Prime Minister National Youth Award for Nation Building in November 2019. Since then, he served as Surrey County coordinator for the National Youth Parliament of Jamaica in 2020, ending his tenure as Prime Minister for the eleventh staging of the sitting. Throughout his tenure, over 880 young people benefitted from the online seminar series the county hosted. He also facilitated the donation of 1,350 textbooks to five (5) high schools in St. Thomas and Portland. David is the founder of the New Jamaica Foundation (NJF), which is an organization whose mandate is to promote youth development. Over the years, the NJF has hosted numerous workshops, planned donations and hosted exam revision sessions for hundreds of secondary school students. For his academic performance and community involvement, David received the Governor-General Achievement Award for the parish of St. Andrew in 2021.

He is eager to make his contribution to national development. Since January 2021, he has served as the Regulations and Certification Committee Chairman of the board of the Early Childhood Commission (ECC). In this position, he successfully advocated for the declaration of the Year of Early Childhood Development which was made by Proclamation by Governor General, Sir Patrick Allen in January 2022. During his tenure, the number of delinquent early childhood instructions (ECIs) fell dramatically from 140 in February 2021 to 54 in August 2022. His committee also published the inaugural Assessment Report of Early Childhood Institutions in March 2022, which provides the inspection scores of all ECIs throughout Jamaica.

This year, he will be pursuing a Master of Philosophy in Development Studies at the University of Cambridge after receiving the HRH Prince of Wales Scholarship.

The FSS congratulates you, David!