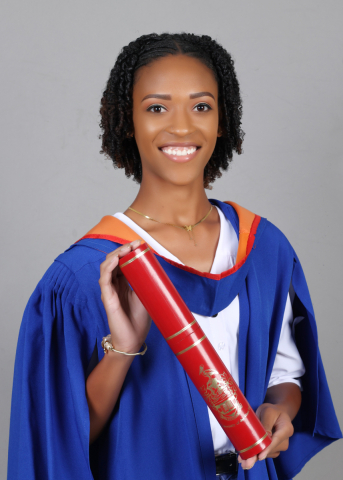 A native of the unassuming community of Belvedere, St. Andrew, Tamarnie Tavares grew up in a nuclear family where she is the second of three (3) children and takes pride in being the middle child. Her journey thus far has been challenging, nevertheless, she continues to be eternally grateful for the love and support she has gotten over the years.

“Small circle.” “Big dreams.” “More moves.” “Less noise.” These seemingly simple phrases have come to create the foundation for the principles governing Tamarnie. She believes she is a hardworking, talented and humble young woman who is purposeful in making her dreams a reality. She strongly believes that “every accomplishment starts with the decision to try.” A self-described introvert, she is still a big dreamer but won’t allow herself to get lost in a world of fiction as she wholeheartedly believes in taking disciplined action.

Tamarnie is a proud past student at Holy Childhood High School which she credits for her growth and development. She was involved in several clubs and societies with an affinity for quizzes and business. She was honoured to have been given the opportunity to influence and inspire her peers through her service and leadership as a youth advocate both internally and externally – through her appointment as the Deputy Head Girl and youth organizations such as the Kingston and St Andrew Municipal Corporation Junior Council.

Tamarnie holds a Bachelor of Science in Operations Management (Major), and Management Studies (Major). She was blessed with financial aid through scholarships – a blessing that has brought her through high school and now university. She draws much inspiration from Beau Taplin who said “She was unstoppable not because she did not have failures or doubts, but she continued on despite them.”

We are so proud of you, Tamarnie!