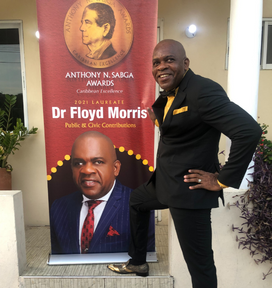 The Faculty of Social Sciences heartily congratulates Senator Dr Floyd Morris on receiving the 2021 Anthony N Sabga Award for his public and civic contributions to Jamaica.

The Anthony N Sabga Awards is the first programme of its kind in the Caribbean. Four prizes are awarded annually for achievements in Arts & Letters, Entrepreneurship, Public & Civic Contributions and Science & Technology. The philosophy behind the Awards is that in order for the Caribbean to develop, in the sense of a civilisation rather than an industrial centre, excellence in key fields of endeavour must be sought out, rewarded, and promoted for the benefit of all citizens. In this regard, the Awards are similar in intention to the Nobel Prizes.

The Awards are fully funded by the ANSA McAL Foundation. The prizes consist of TT$500,000, a medal, and a citation which are presented at a ceremony early in the year. Eight of the eleven ceremonies so far have been held in Trinidad, while the 2017 ceremony was held in Georgetown, Guyana, the 2018 ceremony in Kingston, Jamaica and the 2019 ceremony in Barbados. It is expected that the ceremony will be held in different territories in the future.