It was a full Physics Lecture Room B that listened to a talk on “CubeSat” by Professor Norman Fitz-Coy, aerospace engineer at the University of Florida, on Thursday October 3, 2019. The diverse set of attendees included staff and students from the Department of Physics (hosts) and the Faculty of Engineering. Professor Fitz-Coy’s talk focused on work that was done leading up to the design and building of his latest CubeSat (Cube Satellite), which is called SwampSat II. Prof. Fitz-Coy was involved in the development of the CubeSat “SwampSat”, which was sent into space several years ago. SwampSat II is a University of Florida CubeSat Project for VLF Wave Characterization, and was developed by the Space Systems Group at the University of Florida. It is scheduled to be sent into orbit by piggybacking on a NASA mission to the International Space Station (ISS) in February 2020. SwampSat II utilizes a novel mechanism to deploy and maintain a 4 m × 4 m square loop antenna that is used to measure very low frequency (VLF) waves at an altitude of 500 km above the Earth’s surface. The spacecraft utilizes an S-band transmitter to relay the science data back to a ground station on Earth. This CubeSat is especially important as the Department of Physics has initiated work to design and build its own CubeSat as well as a separate S-band ground station capable of receiving science data transmitted by S-band satellites such as SwampSat II. 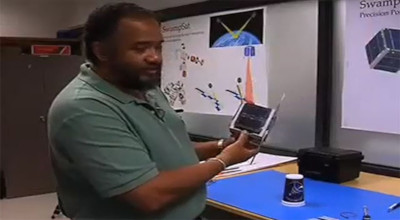