Over 50 Barbadian or Bajan students toured NOAA Ship Ronald H. Brown during the vessel’s short port call in Bridgetown, Barbados. While aboard, students learned about NOAA’s mission, the role the vessel plays in cutting-edge research, and why their island nation is at the center of an unprecedented effort to better understand the interactions of atmosphere and ocean.

The Ronald H. Brown was in Barbados following its first leg as part of NOAA’s Atlantic Tradewind Ocean-Atmosphere Mesoscale Campaign. This campaign, known as ATOMIC, is creating a virtual laboratory on and around Barbados. “The nation of Barbados has been a vital partner for ATOMIC,” said Sandy Lucas, NOAA Climate Program Office Program Manager. “We were excited at the chance to host local students and discuss careers in STEM, oceanic and atmospheric research, and how international collaboration is supporting weather and climate prediction.”

During the tour students were especially interested in hearing about the weather balloons launched from the deck of the ship while at sea. While holding an inflated balloon, researchers explained that the weather balloons can soar over 15 miles in the air collecting data. Although the large balloon seemed to get most of the glory, students also learned about the importance of the radiosonde attached to the balloon and how it collects data on temperature, air pressure, humidity, and GPS location. In an age of super computers and multimillion-dollar satellites, students were impressed that this seemingly small and simple box is one of the most vital components of weather prediction. 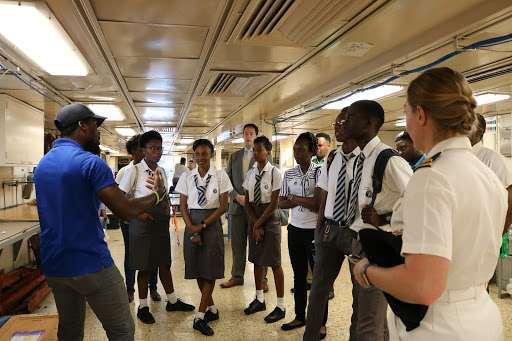