Dr. Francis Bowen was probably among the first West Indians to obtain a Ph.D. in Physics.

Prior to pursuing tertiary level education Dr. Bowen was a part of the British West Indies Regiment as a Warrant Officer, Class II, 1917-1919 and served in France, Belgium and Italy.

Dr. Francis Bowen enrolled in Columbia University in 1921. He was awarded a Bachelor of Arts in Mathematics (1925) and a Master of Arts in Physics (1926). (He was among the top four in the B.A. Honours examination and first in the Masters Examination) After obtaining these degrees he worked at Johnson Smith University (1926-27) as a Physics Instructor. He later returned to Columbia University as a Graduate student in Physics and Mathematics (1928-31).

Dr. Bowen was employed as Lecturer in Physics and Mathematics in a Nigerian University (1931-1945). For 1945-1947 Dr. Bowen attended the Imperial College of Science, London University as a research student in Spectroscopy and was awarded a D.I.C.

In 1947 he was recruited as Senior Lecturer in the newly formed University College of the West Indies and was in the same year appointed as Acting Head the Department of Physics. He was the first Head of the Department of Physics. His tenure at The UWI lasted from 1947 to 1962. During this period Dr. Bowen was also the Warden of Chancellor Hall and Dean of students for the Faculty of Natural Sciences (now Science and Technology). He even served for brief periods as Acting Principal on a number of occasions!

It was in 1949 that the Doctor of Philosophy in Physics was awarded to Dr. Bowen by the University of London.

Dr Bowen personally taught the very first Physics classes in the UCWI to the pioneering batch of medical students in the old wooden huts on the campus. He taught Geometrical Optics among other subjects, and was meticulous in using a metre rule to draw the straight lines required. He also taught Modern Physics.

Dr. Bowen retired in 1967 after nineteen (19) years of devoted service to the UWI.       Dr. Bowen died in August of 1971 but remains forever one of the Caribbean’s most brilliant Physics minds.

In 1958 Dr. Bowen was appointed by the Council of the University College of the West Indies as the U.C. representative to attend the 8th Quinquennial Congress of the Universities of the British Commonwealth in Canada. In 1959 he was also appointed a member of the Selection Committee under the Jamaica Agricultural Scholarship Regulations and was reappointed in 1960.

“Dr Bowen aka ‘Bo-Bo’ was a large imposing man, who was usually 'classically' dressed in long sleeves and tie (sometimes the tie was used in lieu of a belt to hold up his trousers). On meeting him for the first time one initially got the impression that he may have been a stern person but he was actually quite approachable and often had the hint of a smile on his face. He showed deep concern for students, and frequently invited them to his warden's house for meals and the polishing of their social skills.

Dr Bowen was instrumental in founding the University Lodge of the West Indies in 1951. As a memorial, this Lodge has, annually, awarded a prize to a high performing student in physics or computer science.”
-Former Student 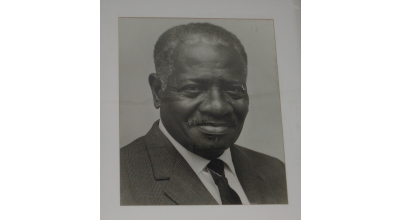