Dr. Michael Neville McMorris attended the University College of the West Indies, Jamaica (UCWI) between 1953 and 1956 as a Government Scholar where he obtained a B.Sc. in Physics and Mathematics. He was the recipient of the Carnegie and Leverhulme Fellowships in Physics that enabled him to obtain B.A. and Ph.D. degrees from Trinity College, University of Cambridge.

Dr. McMorris returned to the UCWI and joined the teaching staff of the then Faculty of Natural Sciences in 1961 as an Assistant Lecturer.  He was promoted to Lecturer in 1963, then to Senior Lecturer in 1973. In 1975 he was appointed Head of the Department of Physics. He served a 6-year term in his first tenure and a one year term in his second (1992-1993).

Dr. McMorris was appointed Dean of the renamed Faculty of Pure and Applied Sciences in 1993 and continued in that post up to his retirement in 2000. After retirement Dr. McMorris continued to give service to the Faculty up to 2003. He is remembered as an excellent and visionary leader.

Dr. McMorris also served as a visiting lecturer at Bedford College, University of London, and made short-term visits to the University of California, Berkeley, and the London School of Economics.

Dr. McMorris is known for his standardization of examination papers in the Department of Physics and for initiating and institutionalizing the biennial Faculty Research Conference during his tenure as Dean.  His organizational skills were exceptional and served the Department and Faculty well.

The Michael Neville McMorris Prize was instituted in 2019 in memory of Dr. McMorris.  The annual award recognizes the excellence of an undergraduate physics student.

Tribute
“There is nothing that can be said, no matter how long the exaltation, that will justify the life lived by my Father.”
- Dr. Nicolas McMorris, Deputy Dean, Faculty of Engineering, UWI Mona and Son

Dr. Michael Neville McMorris is survived by his wife and three sons. 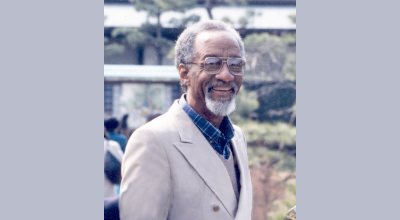