In 1969 the department was one of the largest spaces in then the Faculty of Sciences with further expansion expected “during the next triennium”. The department was housed in one three-storey and three two-story buildings - the total floor space available was well over 20,000 square feet. Workshop facilities were contained in separate single-storey buildings. In addition, extensive accommodation was available at the old Cable and Wireless Transmitting site at Stony Hill - set in 5 acres of high ground and used for housing equipment connected with the department’s programme of atmospheric and ionospheric research.  In 2020, the Department of Physics remains a sizeable one, retaining its buildings with the exception of one of the workshops which now operates as a separate entity formerly the Mechanical Engineering Workshop.

In 1969, two main undergraduate courses were offered – General and Special degree courses. In additional Preliminary Science and Premedical courses were given at a level similar to G.C.E. Advanced level. Other courses included (i) Basic Science to Nurses from the Training School at the University Hospital; (ii) Applied Physics, and (iii) Geophysics (at the postgraduate level). The programme was delivered in day classes. In addition, the B.Sc. General was offered in evening classes. The evening class programme spanned six years, largely to accommodate students with a wide range of entrance qualifications. In 2020, five majors are available in the department - General Physics, Electronics, Environmental Physics and Alternative Energy, Materials Science and Medical Physics.  Minors are also available for these specialization and for the recently approved Renewable Energy Management. Other programme offers include a B.Sc. in Physics with Education, Biomedical Instrumentation, Electronics and Computer Science, Electronics and Alternative Energy Systems and Climate Science and Electronics.  The Department’s legacy includes being the home of the conceptualization and incubation of Electronics Engineering between 2008 and 2013 which has since grown into the Mona School of Engineering, now the Faculty of Engineering. 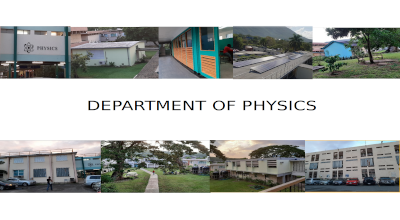