Whereas Weather refers to the day by day variation of precipitation, temperature, pressure, relative humidity and other parameters which vary with atmospheric conditions; Climate on the other hand refers to the average behavior of the weather over a longer period of time, such as a season (3 months) or a year or a decade. It is impossible to predict weather over a period of longer than 10 days, and after a day or 2  the prediction is plagued with  inaccuracies as the atmospheric system is so chaotic. However some success can be achieved in predicting average conditions over a longer period. The situation is similar to that in statistical mechanics or kinetic theory, where one cannot predict the behavior of an individual molecule of a gas, but can predict the expected mean state of the gas. Moreover if we look at the physical external forcing of the climate we see that some of the important forcing agents change gradually and can be expressed as averages:

The Sun which ultimately provides the energy for evaporation and other processes, rises and sets, and the earth orbits around it at fixed inter ervals.  The Ocean, which is a source of moisture has a very large heat capacity so that its temperature changes slowly. Because changes in the tropics are less abrupt, it is easier to predict the climate of the tropics than of the temperate zones, and our particular area of interest is the Caribbean. 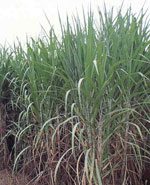